So remember that time I told you I thought I had lost a tampon in my lady bits?

Well, almost immediately after posting that (and following up on comments) I started to feel worse. My headache was worse and my body was kind of achy and I realized I had been peeing a lot so I read some more Google results on lost tampons and TSS and then remembered I had forgotten to take both of my nightly meds so there was a good chance I was just experiencing some minor withdrawal.

So I got up to go to the bathroom, again, and use the bathroom light (so as not to disturb Jack) to make sure I was taking the right amount of medication and not spilling it all over the floor for my kid to pick up and eat or stick up his nose, and I decided to give my palms another look.

They looked red. But was that really a rash? I mean, I didn’t remember how I was just laying in bed. Maybe I was putting pressure on my hands. I’m very fair-skinned so I get red easily. But then I remembered one of the Google search results described the rash as looking like sunburn. So I did a closer inspection and realized that there was a very distinct line going down the middle of the side of my hand — my pinky extension, if you understand — and on the palm side it was completely red but on the top it was normal-skin-tone-colored.

Then my abdomen started to feel a little weird, like it had been for days, but this time I convinced myself it was a symptom of a forgotten tampon and not my weird eating habits, so I panicked a little.

And I cut one of my nails, again, and decided to do another search. I bore down and felt inside and got to that weird part that I ended up somehow hurting before, and I remembered how I thought it was super weird that it seemed like there was a hole in the middle and then I remembered one of the Google search results said the cervix is like a little hard doughnut. I had found my doughnut. 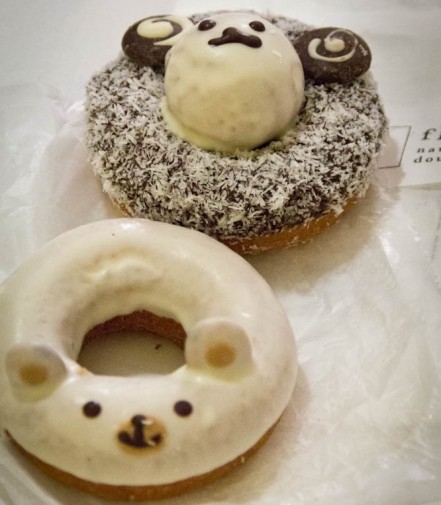 Photo Credit: John Gillespie / Flickr (CC BY-SA 2.0) (Cropped)
I mean, if one of my baby-making parts has to look like a doughnut, can’t it be a cute one?

But still no tampon. But another Google search result said that it’s possible for the tampon to get stuck behind your cervix. Yet so many others said if you can’t find a missing tampon yourself, it’s not really missing and never was to begin with (i.e. you’re just going crazy and simply never put one in).

And then I remembered how the other day I thought I was going to have diarrhea but when the time came it wasn’t diarrhea but it seemed like it almost could have been. And that was a symptom on one of the Google search results, too.

Eventually I stopped freaking out enough to go to bed, but I still opened my eyes now and then to check my hands to see if the redness had gone away or gotten worse but I couldn’t tell because the light was off. So I don’t know why I kept checking.

Then I wrote this and when Jack said, “I thought you were going to bed,” I finally decided to just go to sleep, but I said a little [whatever the equivalent to a prayer is to someone who isn’t religious] hoping that I would make it through the night so Holden wouldn’t have to grow up without either parent. And made a vow to call the clinic I found online the very second I woke up. And then drive over there immediately even if they couldn’t schedule me for hours later.

And then I rocked back and forth a little before closing my computer and my eyes.

This post is part two of My Lady Bits are Not a Black Hole, (also read part three and four) and all posts are part of the Confessional Series. Go to The Confessional page to confess your sins, or secrets, or hilarious stories.

Facebook: Nonsense & Shenanigans / Twitter: @nonsenanigans
I don’t have any prompting questions for you currently, just wish me luck that I don’t die.

3 thoughts on “Confession: My Cervix Might be a Doughnut”