(First, go to this post if you don’t know what my #Before30BucketList is. I’ll also be going back to that original post and noting each goal accomplished if you want to keep up but miss out on some of my posts.)

This was a big one. Huge. (I can never not think of Donald Trump when I say that now. Thanks, Obama.)

His first tour in 13 years.

Let me go back to the beginning.

When I was a wee lad, my mom took me camping and horseback riding and fishing and hunting and swimming in (probably) rabies-infested lakes and sat me atop bars with antler decorations while she had a drink. (No really, it was awesome.) 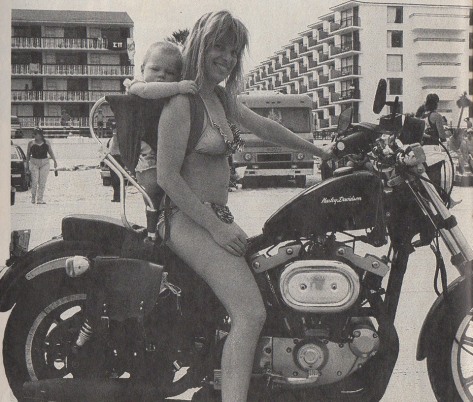 I couldn’t find any cowboy pics but here’s one from my first birthday of me and my mom on her Harley down at Bike Week in Daytona, so you get the idea.

By looking at me now, you’d assume I listen to Marilyn Manson or My Chemical Romance or Nirvana or Garbage (I’m just throwing out musicians here). And I do. I also adore Guns ‘N Roses and The Backstreet Boys. But I was raised on country.

When I was 5 I danced the 2-step around and around and around our living room coffee table. When I was 3 my favorite song was “That Smell” by Lynyrd Skynyrd. Shania Twain was my ultimate roll model and I appropriately designated one of her songs to every aspect of my life. I asked my mom what “love grown cold” meant after listening to “The Thunder Rolls” for the millionth time.

So when I was driving sometime in February, listening to Cat Country, and heard that the creator of “The Thunder Rolls” himself was having a world tour and would be in Philadelphia at the end of March, I knew I had to go. I also had to bring my mom. There was no question. Except money, because I’m poor.

So I researched tickets and found that crappy seats would only cost $150 total and crappy seats were better than no seats. I didn’t act immediately, but I kept it in my head and thought up ways to acquire a million dollars.

Closer to my birthday, I asked my father if he would get me $90 colored pencils (because I’ve jumped on the adult coloring bandwagon). He said yes, because I’m a daddy’s girl, but that would be the only present I would receive this year. I could pick one thing. So the next day I asked if I could get Garth Brooks concert tickets instead, which were a bit more expensive. Again, he said yes, but that was it. No colored pencils.

I did not have an internal dilemma over which to pick.

Then, the amazing man that he is, my father told me to get the tickets I really wanted. It didn’t matter how much they cost, as long as I knew I was only getting one thing. (I still find this amusing, because getting me the colored pencils and the cheap tickets would have cost less than the tickets I got in the end.) 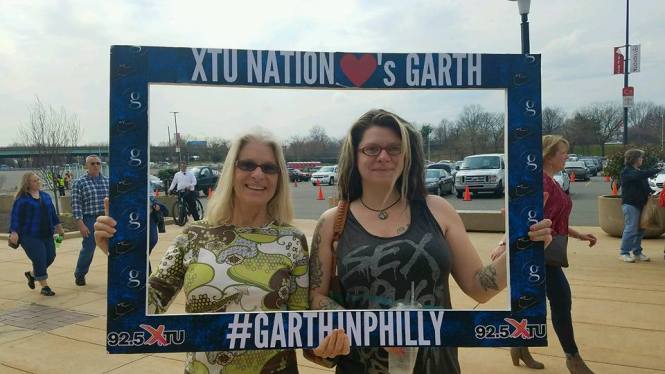 I found decently priced tickets in the 7th row of the 3rd floor section at Wells Fargo Center. I’ve only been to one other big arena concert like this and it was The Backstreet Boys when I was 12 and I don’t remember where it was and our seats weren’t that great so when I tried to research the seats I didn’t realize quite how good they were. I knew we were in the front right section. I knew we were in the 7th row. But for some reason I thought there would be VIP sections and other crap in front of that so when I thought “7th row” I really thought maybe technically 20th row.

I was wrong. We were in the goddamn 7th row. So after our pretty pleasant hour-long drive up to Philly and taking photos of snow drifts still in tact at least a week after snow actually fell and feeling the good vibe of all the hicks and rednecks tailgating, we went inside to this: 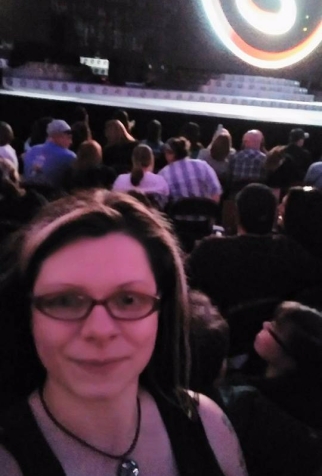 That’s the stage behind me. That’s how close we were to the stage. When he flung water out into the crowd, it hit us.

We were shocked and awed and so freaking excited. Then the loud booming voice came on the loudspeaker and informed us that the concert was starting . . . in 5 minutes. So I ran to the bathroom and came back to the lights dimming and the people screaming and the opening act coming out. Usually I don’t give a damn about the opening act, and this was a guy I had never heard of, but he was so adorable even the girl next to me said she wanted to put him in her pocket and take him home, which was exactly what I was thinking. He was one of those guys who always smiles, like Luke Bryan but cuter. His name was Mitch Rossell and he was really good and I’m actually mad at myself for not listening to more of his stuff until right now. (“Raised By The Radio” is awesome.)

So after that adorable hunk of man meat, Garth burst onto the stage. The crowd went wild, as expected. We actually went to the first of two shows that day — the second of four shows in Philly. He had played one the night before, then ours, then another immediately following ours, then one more the next day. During the show my mom and I were commenting about how we don’t know how he does it — it truly felt like he put his whole heart and soul into our show, and to do another one right after seemed impossible.

He put on an amazing show. He sang wildly and ran around the stage gracefully and engaged with the audience hilariously. He opened with my personal favorite, “Rodeo”, which set the mood to get us all pumped as hell. At one point I was dancing and singing so hard I fell over (no, I wasn’t drunk, although the girl next to us did buy me a $12 beer). 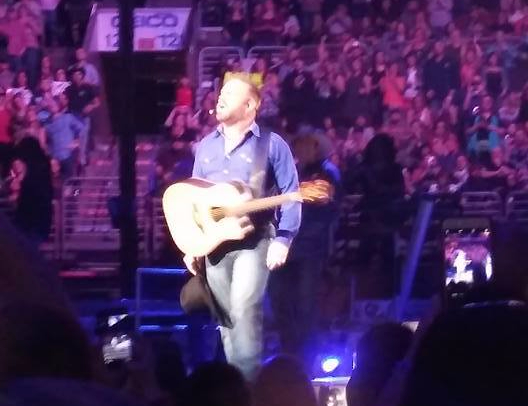 (This is where I wanted to add a video, but apparently uploading live performances violates copyright laws on YouTube so now I’m afraid of getting sued. Here are crappy pictures instead.)

During the performance he engaged with us. He smiled and laughed the whole time (you can hear his smile in some of his songs and it’s wonderful). He grabbed a girl’s phone from the front row and took a selfie with it. He gave his guitar to an 11-year-old boy who was holding a sign asking to hear “Long Neck Bottle,” which Garth found hilarious because 11-year-olds shouldn’t drink. He discussed his songs and played 95% older ones, which was obviously the reason we were all there anyway. He made fun of us and said we probably wouldn’t know the lyrics to certain songs, and we ended up outsinging him.

During a personal favorite moment, he got the whole crowd to act a fool. He threw out his fingers like guns and got that section of the crowd to cheer and scream and go wild. Then he did it to another section, and another, and back and forth and all around. I thought it fitting that I happened to be in the only section that booed when he pointed at a different section, because competition. He looked at his fingers as if they were magic and I thought “This would have been awesome even if he didn’t sing. Garth could be a comedian or any other kind of performer in the world. We’re eating this up.” At the end of his finger-gun-show, he said “That was the stupidest thing I have ever seen. That was awesome. ‘What do you do?’ ‘Oh, I’m stupid for a living’.” I thought he should change stupid to fun but either worked, really. 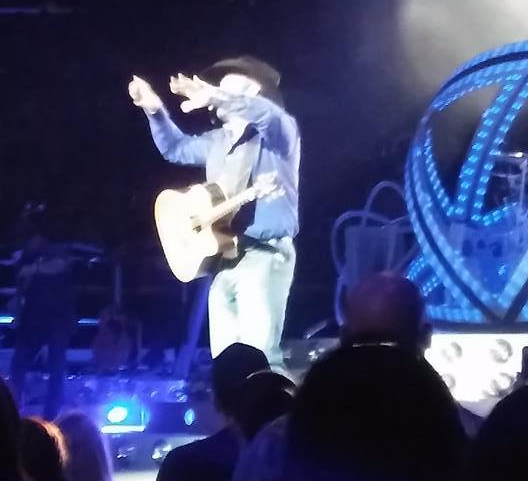 These aren’t his finger guns but the photo seemed to fit.

When he played “The Thunder Rolls” everyone went nuts. He said there are some songs not everyone knows, and some songs that don’t make it, and some songs that are so timeless that people come from all over the world just to hear that one song and “The Thunder Rolls” was it. (My mom took an awesome video but again, copyright laws.) He even sang the super extended version where the wife kills the husband in the end, which we all love whether we admit it or not. He sang the extended version of “Friends In Low Places,” too, which embarrassingly I didn’t even know existed.

Of course encores are typical of concerts now. I noted that it was kind of disappointing, that they’re programmed into the show now, because originally they only came about when the audience loved the act so much they insisted on more. Now it’s expected, so encores are allotted into the time. Honestly, I think the “encore” was just as long as the planned concert, but Garth did take recommendations from the audience so it wasn’t completely planned. My mom really wanted to hear “Shameless” and I thought that, since everyone uses flashlights on cell phones instead of lighters, if I used two lighters he would notice us and ask what we wanted to hear. But we weren’t holding a sign so he didn’t. I killed one of my lighters and the other one turned different colors in the arena lights so it wasn’t a total loss.

I made a heart with my hands and Garth hand-hearted back. 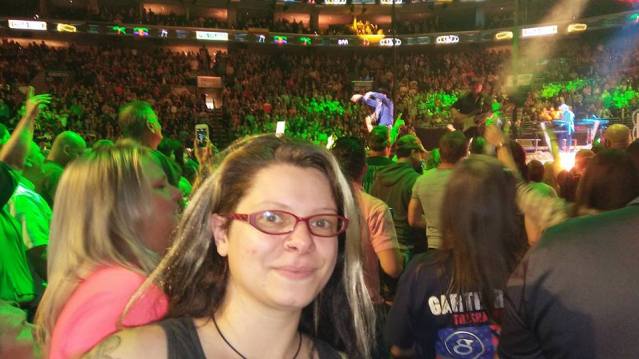 Garth’s at center stage in this pic. You can imagine how close he was when he was in front of us.

And even more perfect, I got to show my mom an awesome time and if anyone deserves it, it’s her. Because of this concert I got her (and me) tickets to see Lynyrd Skynyrd and Hank Williams Jr. in August and she pretty much freaked out (she loves Hank). 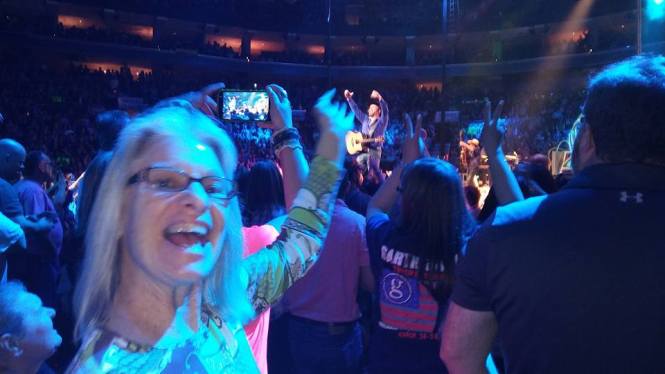 After the concert we made our way out and walked all the way around Wells Fargo Center because we’re horrible with figuring out where the hell we are. My Garth keychain broke but I saved it, we saw people waiting in enormous lines for the next show, some crazy girls were stumbling all over the place, and it still felt like home. While we were waiting in the car for the traffic to subside, I looked up and saw some guy standing next to my mom’s window. We rolled down the window and he handed us an unopened beer without a word. We took it and went on our way. I forgot about it until I found it in my purse the next day. 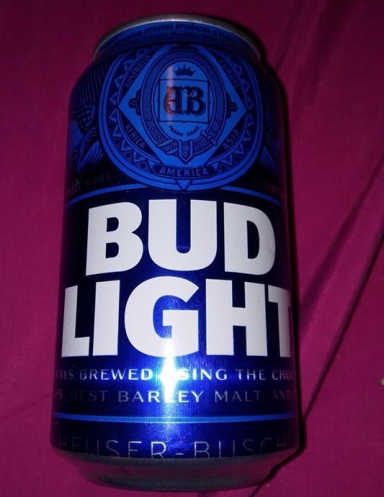 It’s still in my fridge.

We found ourselves getting into small adventures along the way home, but nothing will ever compare to this experience.

Companions: Mom, Girl sitting next to us, Guy who gave us a beer.

2 thoughts on “#Before30BucketList: Rock Out At A Concert”