(First, go to this post if you don’t know what my #Before30BucketList is. I’ll also be going back to that and noting each goal accomplished and maybe adding or editing some items, if you want to keep up but miss out on some of my posts.)

I may have cheated on this one a little bit. I should probably retitle it “Take A Dance Class” but I don’t feel like it and this is my list so I’m allowing certain liberties. Especially life-got-in-the-way-because-I’m-taking-on-too-much liberties.

I really have no rhythm and can’t dance very well and actually don’t dance at all unless I’m drunk, so I decided that I’ll never learn to simply dance and that I should take a dancing class instead. I found some near me at dance studios for those fancy dances like ballroom dancing and Tango and stuff but they were expensive so again, my handy-dandy free library classes saved me.

I found a free line dancing class and got super excited because if you don’t remember this from my Rock Out At A Concert post, I was raised country and am still country in my soul and used to dance the two-step around my living room table 24/7 when I was young.

I tried to find a cowboy hat or boots to wear to my first class but I seem to have lost everything once important to me and held on to everything meaningless, so I just went looking like my normal self (aka in my Star Wars PJs and skater shoes).

When I got there I was pretty surprised to find literally everyone over 60-years-old. The instructor looked to be about 80. But damn, was she feisty. Everyone else caught on faster than I did and she didn’t hide the fact that she got frustrated with me several times. But once I was doing well, she made sure to let me know and was always very nice when we weren’t dancing.

We learned random line dances, not the popular kind you’ll find on YouTube (I tried). She called them the “Mambo”, “Disco”, “Hip-Hop”, “Waltz”, and “Cha-Cha”. They sound like normal dances, but those she actually taught us are nowhere to be found on the internet. She said she gets bored with the same old dances over and over again so she looked up new ones, but I don’t know where.

I was the best at “Hip-Hop”. Of course I would be. It involved swaying your hips and doing lots of crossovers and used all four walls. I enjoyed it because we danced to both country and actual hip-hop, and it was interesting to apply the dance to different songs and styles of music because one was faster than the other. Interestingly, all of the participants preferred to dance to the hip-hop song, I think because it just seemed to flow a little better.

Dancing is a workout, in case you didn’t know. I got pretty excited about attending this class because it also worked its way into my “Start A Workout Routine” item. I was sweaty by the end of each hour, when the instructor made her announcements about balance classes and donating peanut butter and getting your blood pressure checked. I remember the very first day, at the end of class, when she said “If you’re not going to be here next week, please let me know” and looked directly at me. I held eye contact and replied “You’re not getting rid of me, now.” Everyone laughed.

I, unfortunately, missed the first two classes because I hadn’t even found out about them until the third, and then the last two because I had to work (more on that later, since “Get A Job” is another list item). Originally I had planned on getting my mom to come take pictures and videos of me in the class, but that never happened so I don’t really have any proof that I did, in fact, learn to dance (a few dances).

Also my brain’s a little foggy today so I apologize if this post isn’t as witty and adventure-filled as the others. I promise this class was the highlight of my week for a while.

I also planned on doing belly dancing, but that class was at night and cost $15 a week and just didn’t seem to fit into my schedule so I had to cancel that, too. However, I plan to take every opportunity to learn more dance moves I come across. 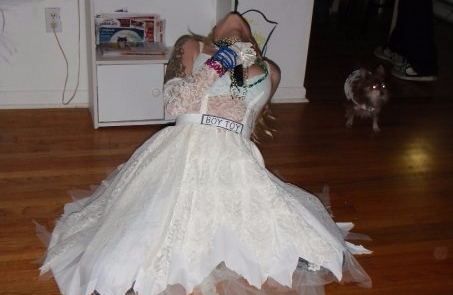 Here’s a picture of me dressed up as Madonna pretending to perform, which is kind of the same thing as dancing (or at least the only picture of me that came close to dancing). I didn’t want you to feel left out with no photos and all, but now I realize you might be scarred. Sorry.

One thought on “#Before30BucketList: Learn To Dance”