The tampon debacle is over. Or, actually, it never even existed.

Last night I thought I was dying. I started to feel very sick, achy, headache — all the symptoms I didn’t want. My palms remained red. I took my temperature throughout the night and it went from 99.2 to 99.4 to 99.5. And you probably think I’m nuts for thinking that’s a fever, but my average core temp is low, like 97.3 low, so anything in the 99s is a fever for me.

But none of that happened. I slept fine, woke up, felt really really crampy, got ready and headed out.

Oh, I forgot to mention in the other three posts that using tampons felt uncomfortable. Every time I tried to use one I felt sicker, so I decided not to use any until this was all sorted out. Only I also didn’t have any pads, only panty liners for over night or super heavy flow moments. So I filled my underwear with those bitches. 5 of them. Everywhere. I wasn’t about to have one of those leakage moments with nowhere to run. 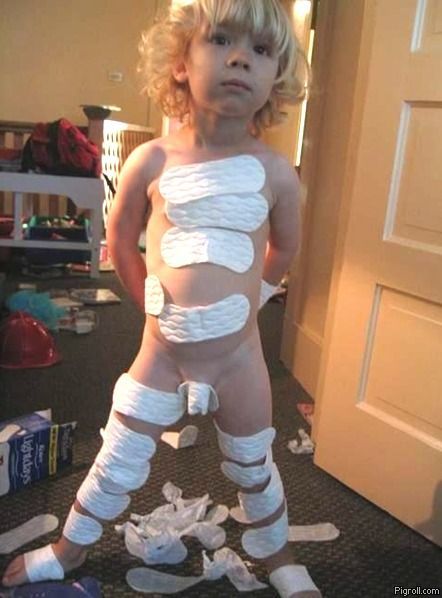 Photo Credit: Pigroll (Found using Google Image Search / ‘Labeled for reuse’ option)
Kind of like this. (This is not my child, although the resemblance is ironic.)

END_OF_DOCUMENT_TOKEN_TO_BE_REPLACED

So I guess I’m turning this tampon debacle into a live-tweet kind of thing. Only in this case, it’s live-blogging.

A short recap: My Lady Bits are Not a Black Hole, even though I think there’s a lost tampon up there somewhere, and at first I thought I was fine, but upon further investigation I found out My Cervix Might be a Doughnut, and that I’m showing an array of symptoms and might die.

I’m here to tell you that I did not keel over in my sleep. So that’s good.

And I did call that clinic, which is also good, kind of —

END_OF_DOCUMENT_TOKEN_TO_BE_REPLACED

So remember that time I told you I thought I had lost a tampon in my lady bits?

Well, almost immediately after posting that (and following up on comments) I started to feel worse. My headache was worse and my body was kind of achy and I realized I had been peeing a lot so I read some more Google results on lost tampons and TSS and then remembered I had forgotten to take both of my nightly meds so there was a good chance I was just experiencing some minor withdrawal.

So I got up to go to the bathroom, again, and use the bathroom light (so as not to disturb Jack) to make sure I was taking the right amount of medication and not spilling it all over the floor for my kid to pick up and eat or stick up his nose, and I decided to give my palms another look.

They looked red. But was that really a rash? I mean, I didn’t remember how I was just laying in bed. Maybe I was putting pressure on my hands. I’m very fair-skinned so I get red easily. But then I remembered one of the Google search results described the rash as looking like sunburn. So I did a closer inspection and realized that there was a very distinct line going down the middle of the side of my hand — my pinky extension, if you understand — and on the palm side it was completely red but on the top it was normal-skin-tone-colored.

END_OF_DOCUMENT_TOKEN_TO_BE_REPLACED

I’m just going to dive right into this.

I think I have a lost tampon somewhere in the depths of my vagina.

*Disclaimer (that I purposely added after the initial shocking confession) — to those who are squeamish or uncomfortable talking about bodily stuff or private parts or women’s health, or tampons or periods or vaginas, I am not sorry. And you should continue reading. Because it’s about damn time we made this stuff okay to talk about. And if I offend any of you, why the hell are you here in the first place?

Photo Credit: Towe My / Flickr (CC BY-NC 2.0)
This is a legit tampon holder called “the red flower of shame”. Um, what?!

So here’s what happened —